An emotional video has shown the moment actress, Rita Dominic and her friend, Kate Henshaw got teary as she (Rita) dressed up for her big day last weekend. It

Recall that veteran Nollywood star Rita Dominic and her husband, Fidelis Anosike, tied the knot on Saturday, November 26, in a 900-year-old abbey with a distinctive past in North Yorkshire, England.

Almost a week after the grand ceremony, a never-before-seen video of the bride with her friends moments before the wedding has surfaced online.

In the now-viral clip, Rita, while being prepped for her wedding, broke down in silent tears of gratitude while her maid of honour, Michelle. 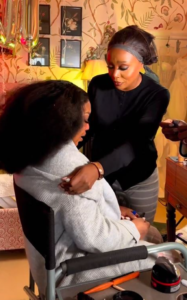 Seeing her friend, Kate Henshaw was also overcome with emotions and almost broke down in tears. She’s seen breathing in and out in rapid succession, trying to hold back her tears. 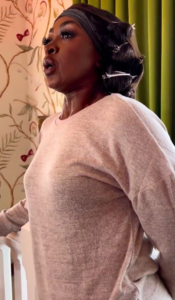 In another gist, A viral video of actress Chacha Eke reportedly testifying in a Church today, November 27, 2022, and appreciating her estranged husband, Austin Fanni for sticking with her despite her mental struggle, has surfaced online.

The actress and mother of four gave a detailed testimony to the congregation during the service. In her testimony, she revealed that she once lodged in a hotel with her husband and two children when she suddenly went mad.

She said she started throwing away all their property and was also vandalizing properties in the hotel. According to her, the incident became quite intense to the point that she felt what she needed at the time was to go to the hospital, a motion which her husband later obliged to.

ChaCha then revealed that she and her husband were ignorant of the mental illness as they felt it was either demonic attack, voodoo, or marine spirit. They even blamed some family members for being against their marriage.

However, while testifying in the church today, she revealed that she is back with her husband again, and thanked him for sticking with her during her trying mental health state.