On Monday, December 5, the Presidential Candidate of the All Progressives Congress (APC), Asiwaju Bola Ahmed Tinubu, delivered a speech at the Chatham House on why he should be elected in 2023.Tinubu refuses to answer questions on how he’ll tackle issues as President after speech at Chatham House. 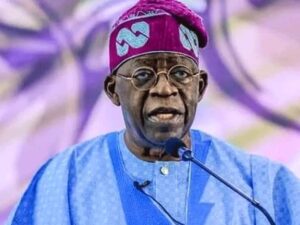 There was however an intriguing twist as he delegated answers to questions he was asked by Nigerians in the Diaspora on how he would tackle certain issues as President, to some members of his entourage. Tinubu was asked questions bordering on insecurity, oil theft, education, and economy and how he planned to address crises in those areas if he becomes president.

Tinubu refuses to answer questions on how he’ll tackle issues as President after speech at Chatham House. The former Lagos State governor asked Governor Nasir El-Rufai of Kaduna State to answer a question on his (Tinubu-led) government would address insecurity and asked the Director of Strategic Communication of the All Progressives Congress (APC) Presidential Campaign Council, Dele Aleke, to respond to the question on oil theft.

Tinubu also asked former Commissioner for Finance in Lagos State, Wale Edun, to respond to a question on how he (Tinubu) would boost the economy if elected.

Watch the video below…

Question Was Placed To Tinubu And He Directed The Questions To Proxies!

Do You Want A Country Ruled By Proxies!

Happening live at the Chatham house in London!!

“This Bella sabi tr0ll person ooo" - Reactions as Bella f!res back at a tr0ll with savage (Video)