The veteran Nollywood actor who’ have being the topic in all recent post have taken to his Facebook wall to confirm that his recent claims of having a new baby and a second wife was only a cruise.

On the post he made on his social media page he said:

So I can get over 60k comments on one post?

But I dy act film, dy give una Hollywood performance since una no send me.

Best voice, una no send me.

I ran for Governor, una no send me.

I’ve been a strong voice for the people, been an activist, I do Endsars, una no still send me.

But na dis one scatter internet. 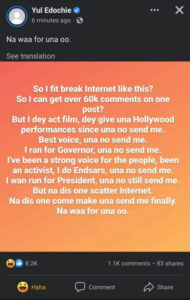