Yul Edochie’s wife Judy under fire for calling self, “Queen of a great King”.[Screenshots]

Judy Austin, the second wife of actor Yul Edochie, has set herself up for premium dragging after a post bragging about being the wife of a great king.

The mother of one who has been in the news since she was unveiled as Yul’s second wife, shared a photo of herself moments ago and referred to herself as Queen Bathsheba, the wife of a great king.

Judy’s caption was not well received by netizens who tagged the post as insensitive, especially since it came after Yul’s first wife publicly declared that her faith and family do not practice polygamy.

“My phones are buzzing once again due to the OLD video trending online today. My family and faith ABSOLUTELY do NOT practice polygamy, although it works for some people.”, May had written.

However, sharing a photo of herself moments later, Judy wrote, “QUEEN BATHSHEBA! Mother of King Solomon. Wife of the great King David. You get the point??? If you don’t gerrit, forgerrabourit.” 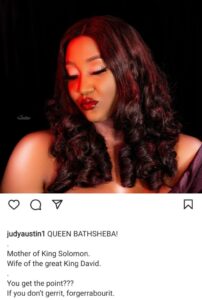 Judy’s post was widely seen as a dig at her co-wife, and many on social media chastised her for it.

See some comments below,

In other news, Yul Edochie has taken to his social media page to assure his fans that he will sort out the issues in his family after he received backlash for impregnating his colleague and taking her as a second wife.

He averred that any issues arising in his family is his “personal problem” which will be sorted out “amicably.”