Popular Skit maker "Zicsaloma" called out for sleeping with young male skit maker before helping them.

"You show people what you want them to see", Tega drags the organiser of BBN, promises to show viewers everything.

"Them do Odogwu bitters them no tell me", Burna boy calls out Obi Cubana (Video).

"You would have gone far in life but Tega happened", Twitter user drags Boma 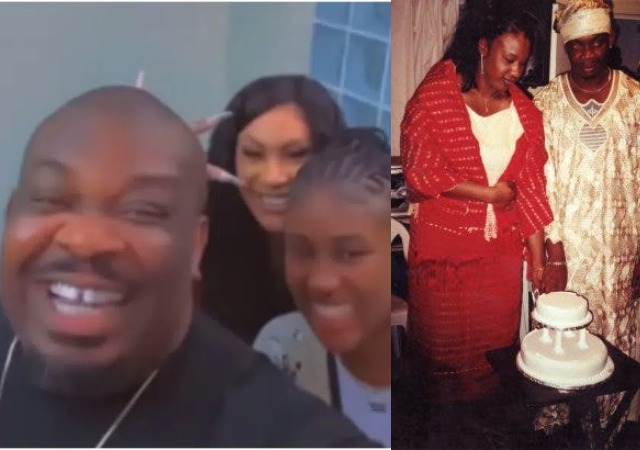 American model Michelle Jackson who is presently in Lagos, has reunited with her ex-husband and music producer, Don Jazzy.

The music producer took her on a tour of his edifice and also hosted her to a romantic dinner in the heart of Lagos. We gathered that they have also been spending a lot of time together since her return.

Michelle Jackson’s visit to Nigeria is coming 19 years after her marriage with Don Jazzy crashed.

It cam be recalled that in 2021, Don Jazzy, who has managed to keep his love life away from the prying eyes of the media and public shocked many when he revealed that he was once married.

He disclosed that he got married to an American model and author, Michelle Jackson, about 18 years ago at the age of 20, though the marriage crashed two years later.

According to the Mavin Records boss, the marriage failed because he devoted his time to music and neglected his family.

Meanwhile, when Michelle Jackson arrived in Lagos some days ago, she had an unpleasant encounter with the police.

Narrating the scary encounter on Instagram, Michelle disclosed that she and her friend had to dock their heads to avoid being hit by a stray bullet from the Police gunshot while being stuck in traffic gridlock.

“First night out in Lagos. My bestie and I decided to go chop some food and bar hop last night….. BUT what i experienced on the road shook me….. my friends tell me its the norm….. ehn!!!

“I knew this trip was going to touch me in many ways….. it certainly did.

Uche jumbo reacts after she was advised to check on her colleague, Genevieve