Crossdresser, Bobriksy, has hit back after actress Tonto Dikeh posted unflattering photos of him on social media.

In the heat of their social media fight on Monday, Tonto Dikeh rolled out old, unsightly photos of the male Barbie.

It can be recalled that the drama between the two started on Monday, May 23, after Bobrisky weighed in on the social media clash between the actress and journalist, Kemi Olunloyo.

Tonto Dikeh had come for Kemi Olunloyo after she publicly berated her for rejoicing over the demolition of her estranged lover, Kpokpogri’s, house in Abuja.

Tonto Dikeh’s former bestie, Bobrisky, then reached out to Kemi Olunloyo to express her support for her in the midst of her clash with the actress.

Well, reacting to the unflattering photos of him that Tonto posted on her Instagram page, Bobrisky also shared a photo of Tonto Dikeh crying and captioned it, “Awww sorry, no be only you sabi post picture”. 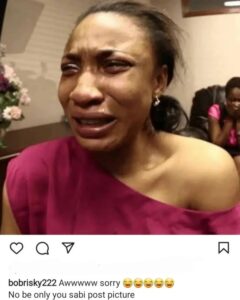 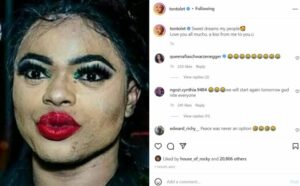 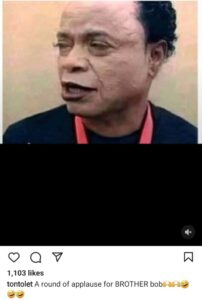 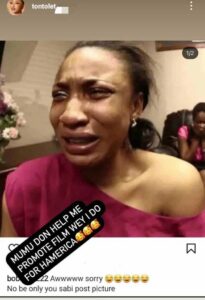 Tonto, however, reacted noting that the photo was from a movie scene.

Meanwhile, Bobrisky’s former PA, Oye Kyme, has taken to her Insta-stories to share what she believes is the genesis of this new clash between the estranged best friends.

According to Oye, Bobrisky vowed to destroy Tonto by allegedly lying that she is a drug addict after she blocked him on Instagram in February 2022.

“Bob anger started since the day Tonto blocked him on Instagram on the 22 of February. That blocking really pain him that he called 12 people in one hour just to tell them that Tonto block him. So since that day he promised to destroy Tonto by every way”, she said in part.