Toyin Abraham reacts to reports on her marital crisis(See more)

Actress Toyin Abraham has finally broken her silence following rumours/reports about issues in her marriage to Kolawole Aijeyemi.

Recall that TNIN revealed that the actress’ husband opened up to his friend about some unacceptable behaviours portrayed by his wife which include avoiding her matrimonial home for days and her failure to take on responsibilities as a wife and mother.

Following this report, the actress’ management came up to debunked the news while stating that her marriage is very much intact.

Despite this, a concerned fan identified as @abolarintemita4 on Twitter boldly asked Toyin Abraham if things were good in her marriage, which triggered a response from her.

“I HEARD THAT YOU ARE HAVING ISSUES IN YOUR FAMILY…..I WAS SO SAD BECAUSE I REALLY LOVE YOU AND I DNT WANT ANYTHING TO HAPPEN TO YOU…”

Replying, Toyin affirmed that she is not having issues in her marriage and called for an end to the false claim.

“PLS STOP! I AM NOT HAVING ANY ISSUES IN MY MARRIAGE,” SHE ASSERTED.

The fan went on to issue an explanation by stating that she wasn’t insinuating that there are issues in her marriage but only wanted to get her side of the story. 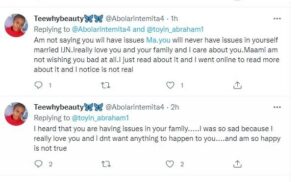 “I didn’t know the journey would be this tedious”- Timi Dakolo’s wife, Busola Dakolo laments, cries out for encouragement