Nigerians have expressed their anger as popular billionaire and philanthropist, Femi Otedola prayed for his old friend, Bola Tinubu to become the next president of Nigeria.

Tinubu who jetted off to France a few days ago has been receiving some important personalities in the European country such as the Governor of Ogun State, Dapo Abiodun, and now Femi Otedola.

Otedola while rolling out a photo of himself and Tinubu prayed for God to grant him his heart’s desire of becoming the president of Nigeria.

“I AM ALWAYS EXCITED VISITING MY GREAT FRIEND ASIWAJU AHMED BOLA TINUBU. MAY GOD GRANT HIM HIS HEART’S DESIRE IN BECOMING THE PRESIDENT OF THIS GREAT NATION …F.OTE💲”

IT IS WIDELY PERCEIVED THAT BOLA TINUBU IS ONE THE DETRACTORS OF THE COUNTRY, HAVING PLAYED A MAJOR ROLE IN THE INSTALLATION OF MUHAMMADU BUHARI AS THE PRESIDENT, WHILST COURTING THE CONTROVERSY OF SETTING UP THE LAGOS STATE REVENUE SYSTEM TO FUNNEL THROUGH HIS PRIVATE COMPANY, ALPHA BETA CONSULTING”,

Bola Tinubu has also been charge with drug offences in the USA back in the 90s with the case ending up with a deal between Bola Tinubu and the US government.

Nigerians are particularly angry at Femi Otedola as he is perceived to be very influential based on his status as a successful businessman in the country. 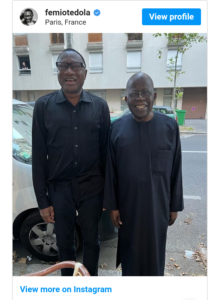