Sowore made the allegation via his official Twitter account on Thursday, July 14, 2022 as he also named Chairman of Norther Elders Forum, Ango Abdullahi and former National Security Adviser, Aliyu Gusau.

He wrote; ”Olusegun Obasanjo, Ibrahim Babangida, Aliyu Gusau, abubakar Abdusalam and Ango Abdulahi are @PeterObi’s “God fathers” the people that ruined Nigeria are the ones fronting for him.

May it never happen that we work with these criminals! #WeCantContinueLikeThis 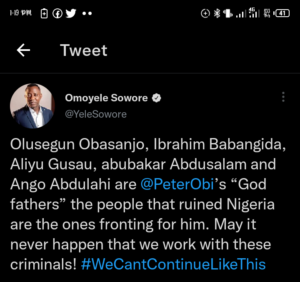