Fans of Big Brother Naija express shock by Groovy and Phyna’s night exploits. When Phyna and Groovy were having a moment under the covers, the video showed it.

Remember that Beauty, who had previously been eliminated due to some wild actions, was with Groovy. In contrast, Amaka told Groovy that she was interested in him and even pleaded with her friend Phyna to help her win him over.

Groovy having spent the previous night in Phyna’s bed did not please Amaka. Well, Groovy and Phyna are seen crouching down beneath the blankets. 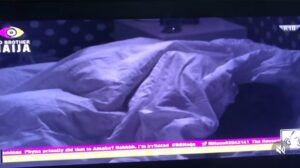 See some reactions below:

Wots all dis talk wit beauty wasn’t mad after all,she knws wot she was talking abt?u guys are talking like she was wrongly disqualified Nd she didn’t do anytin,nobody said beauty was mad but y was she always angry Nd to d extend of acting violent Becos of a man,there is a way she would have acted towards d whole issue,sheybi as she left now groovy has moved on to d next,am angry she didn’t comport herself

Plenty things happened that biggie did not show us! One time sef they both stood up I suppose they went to the toilet anybody that said nothing happened it’s a lie! Maybe not sex tho but something happened

Omo I won’t lie, not because she’s my fav! I’m highly disappointed with phyna, I was thinking this is all cruise and maybe just maybe Amaka was making all these things up in her head! But nahhhhhhhh haba, I don’t even want both of them to start hustling the boy (groovy) immediately his supposedly girlfriend (beauty) just left the show! It’s ins@ne! And the worse of it, your closest friend in thr house told you she likes the boy, immediately you too go put head!! Nah!

Biggie needs to give this set 21 days for reunion… Groovy dey rock Phyna? Phyna wey dem say no dey want man? Where Ilebaye dey like this? The issues plenty. Opoooooor

Funny enough, I am only upset how the relationship started, because of Amaka. Other than that, they look cute together and calm to be honest. Groovy is more relaxed and audacious now

Una no see say na uncle go carry her come he bed and mama no deny before say she no like am. She liked him and it’s not her fault if he likes her or choose her. Even if them break up last last nothing spoil we move

Beauty got disqualified because of Mumu ship Beauty is a big lesson not to lose guard. 100m was on the line and she threw it all away for a guy with pink hair Beauty, you really fucked up o. This kind cruise is dangerous sha. Phyna is not a good person sha

Sismance in the mud…. Tonight they will be drunk and Groovy is going to shift that pant, amaka, ilebaye, phyna going to fight for him… I laugh “in he is safe with phyna’

I am so disgusted right now, am regretting my vote to this girl now, how can she do this! So she always waits for Amaka to tell her her crashes so she makes moves. Rubbish and Beauty jus went home, no wonder she was too loud she also provoked the Argument between Beauty and Groovy. Nonsense. I stand for Amaka and Hermes and Eloswagg now, what a stupid girl.

She’s a hypocrite she played on both beauty and amaka… this girl is a snake in the history of bbn…. at this point bringbackbeauty