“When did you turn to this wayward man? “- Yul Edochie under fire as he shares new video of lady’s backside

Nollywood actor, Yul Edochie has stirred backlash on social media after teasing his fans with a video of a lady’s backside.

Yul Edochie has been making headlines after news of his marriage to his colleague, Judy Austin, surfaced.

In a post shared on Facebook, the actor shared a video involving a lady with a huge backside. 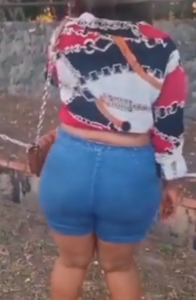 “Can you handle this, see the effects of big engine.”

“When did you turn to this wayward man? You couldn’t stand the stainless look of Aunty May on the internet. You now brought a clip of just but0cks 🤦‍♀️. This man you weren’t like this. Polygamy is not waywardness.” 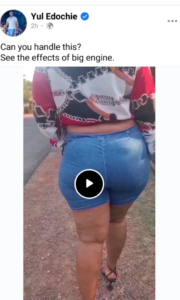 Meanwhile, Nollywood actor, Yul Edochie’s first wife May Yul Edochie has left many gushing with videos from her trip to London, United Kingdom.

In the videos, the mother of four revealed in her voice over that she arrived Lagos airport very early for her flight.

The brand influencer also documented her time on the plane and the sweet delicacies she consumed during her business class flight.

May flooded her page with lovely photos taken at Heathrow airport after she landed in UK.However, May Edochie didn’t mention if she is in London on a vacation or business trip.

In the caption that accompanied the video, she wrote;

“The queen is in London

A sneak peek into my trip”

Celebrities, fans were spotted in the comment section gushing over the video, others noted that she’s living her best life.

“Show me a finer couple” – Frederick Leonard brags as he shares throwback video of date night with wife, Peggy in London (Video)

“Show me a finer couple” – Frederick Leonard brags as he shares throwback video of date night with wife, Peggy in London (Video)