Nigerian singer, Davido’s ex-fiancee, Chef Chioma Rowland and her alleged lover, Kelvin Adeshina Akinjola aka King Carter has unfollowed each other on Instagram.

This comes days after Davido showered praises on Chioma and she reacted.

It could be recalled that Davido reposted a short video of Mama Ifeanyi and described her as the best chef in the world.

Reacting to this, Chioma also shared Davido’s post on her Instastory alongside kissing emojis.

Well, a quick check on Chioma and her lover Kelvin’s Instagram page shows that they no longer follow each other.

However, he has since unfollowed her and the chef has also done the same.

It’s unclear if it’s over between them for good or if they are just on a recess to resume later. 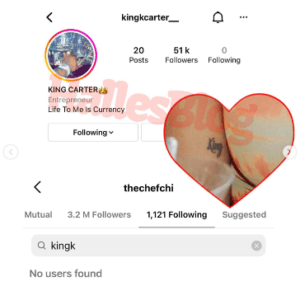